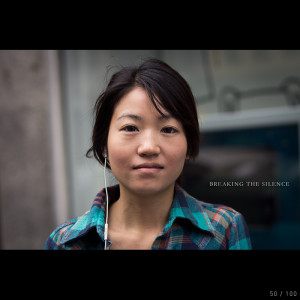 Finding and asking strangers has become pretty easy now. I don’t get the nerves I used to and I’ve got a good idea of who’ll be up for it. So for my 50th stranger I wanted to do something a bit challenging. I decided to try and get a photo of a stranger without speaking to them. Not a candid shot, I’d still get their consent and have them stand like normal. Just no talking.

I don’t normally approach people with headphones in, but they seemed like the perfect candidates. So I hung around my local train station and kept an eye on the steady stream of people that were arriving on the trains. One likely candidate walked passed me and we made eye contact. I pointed at myself, then at my camera and then at her. She seemed to understand and replied with “No thank you”. So communicating what I wanted didn’t seem to be an issue, which was a relief.

A time passed before another likely stranger came my way. This girl I had to give a bit of a wave to to get her attention. I raised my camera up a bit to get her to notice it, and then pointed at her. She stopped, pulled out her headphones and with a frown said “Excuse me?”. I hadn’t moved my lips the whole time. A little flustered I blurted out “Would you mind if I took your picture”. She replied “I’d rather you didn’t” in quite a harsh tone and hurried off. Easily the harshest rejection I’ve had.

I thought I might have better luck in the city, so I jumped on a train and headed in. On my way up to my usual stranger location, the Bourke St mall, I spotted a foreigner listening to headphones. I gave a wave and made my gestures and was met with a silent head shake and a smile. Better off than my last rejection, but still no photos, so I continued on my way. Not far from there I came across a 4th stranger with headphones:

I repeated my routine.
She pulled out one ear piece and asked “Sorry?”.
I repeated the gesture
“What’s it for?” she asked.
I made a chopping gesture with my hands. Trying to indicate a series but probably looking more like I was slicing a zucchini.
“OK” she said, appearing to have come to the conclusion that I was unable to speak.
I looked around for light. Took two shots and then said “Thank you”.
She looked shocked as she walked away.

This is the fiftieth portrait of my attempt at the 100 strangers project.