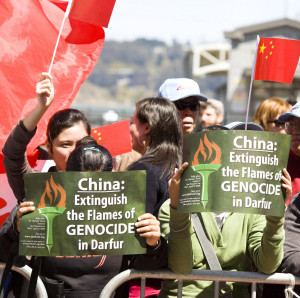 Thousands of protesters and supporters gathered along the Embarcadero in San Francisco today to watch the official run of the Olympic Torch as it visited San Francisco and the United States.

Unfortunately most spectators and protesters were disappointed when after gathering for hours city officials changed the torch route at the last minute.

Rather than run the torch along the previously arranged route along the Embarcadero, according to the San Francisco Chronicle, the torch instead travelled from McCovey Cove to Van Ness Avenue where runners then ran the torch down Bay Street and Marina Blvd.

The change in route for the torch run did not change the protest mood down along the Embarcadero however. Supporters of the Olympics exchanged chants and shouts with protesters who mostly seemed to be protesting China’s continued occupation of Tibet. Flags were waved and protest signs were carried in an overall peaceful demonstration.

To see my complete set of images from today’s protest you can click through here.