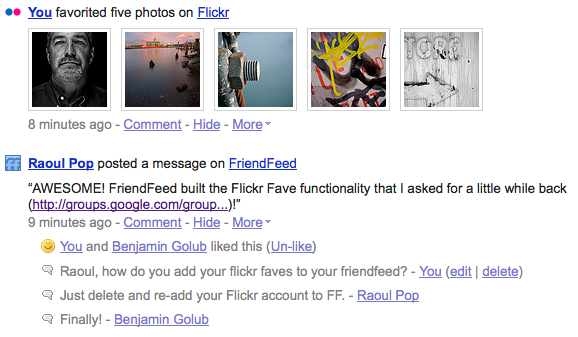 I fave a *ton* of photos on Flickr so it will be interesting how this shows up in my FriendFeed.

One of the main reasons that I fave as many photos as I do on Flickr is that I use the program Slickr to download high res copies of my faves and then use them for slide shows that I watch on my XBox 360 Media Center extenders throughout my house with music.

I’ve long been frustrated when I miss photos from my friends who upload more than 5 photos at a time because they get buried on Flickr’s most recent photos from your friends/contacts page.

It’s going to be interesting watching FriendFeed import more and more of the functionality that I use Flickr for in much better ways than Flickr does. Already I’ve found that I rarely go to my contacts most recent photos on Flickr anymore and instead choose to browse these photos directly from FriendFeed.

FriendFeed has already pretty much replaced 100% of my Twitter usage. It will be interesting to see how much of my Flickr usage it ends up consuming as well.

If you are a contact of mine on Flickr please drop me a comment with your FriendFeed account so that I can continue to see your photographs there. If you haven’t signed up for a FriendFeed account yet, go for it. It’s super easy and allows you to share all of your Flickr photos along with your blog posts, Twitters, and other interesting stuff that you want to share.

If you’d like to add me as a Friend on FriendFeed you can do this here.

One enhancement that I’d still like to see FriendFeed make is the ability to segregate someone’s Flickr favorites from their Flickr uploads. It would be helpful if they allowed me to choose to follow someone’s uploads but not their favorites and vice versa. That’s one of the most powerful things about FriendFeed, the ability to hide certain content and filter the content that you want to consume.

Update: Bret Taylor responds via Twitter and says that you won’t need to delete and re-add your Flickr account to get this functionality after noon today.

“Hey, no fair announcing before we do 😉 You don’t need to re-add unless you want it immediately; they will start showing up for everyone around noon today.”