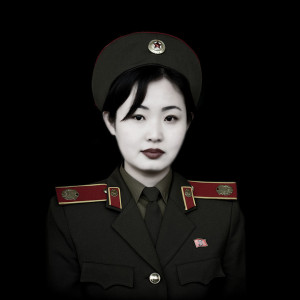 She’s called Kim i Sim.
Miss Kim I Sim lives in Pyongyang 평양. She is dressed in uniform but she is not a soldier. She is the french speaking guide the “Victorious Fatherland Liberation War Museum”. It is a huge war museum. The museum is dedicated to the DPRK’s struggle against the Japanese and the Americans. It has over 80 halls exhibitions. It is not heated up because they have energetical problems. It is very cold in winter. All the lights are off to save energy. The rooms are lighted one after another once the visit is over.
In the museum, you find a lot of weapons. You can see military equipment. During the visit, someone will explain to you the North Korean War. It is not the same explanation as the american’s one. North Korean who meet the rare tourists are severly controlled.
The museum is visited all day long by kids and soldiers. It is propaganda. Like every official site, the museum is visited by the people several times in their life.
Miss Kim has met only 25 tourists in 2009.
Pyongyang, North Korea DPRK
북한